While it may not be a prerequisite for people to know about Etxebarri, it certainly is a name of myth and reverence among the droves of foodies who have pilgrimaged to Basque country.

More well known under the name Asador Etxebarri (asador meaning barbecue, spit or grill in Spanish) the proper name for this small countryside restaurant would be Erretegia Etxebarri (erretegia meaning grill house in euskari). But don’t let words like ‘small’ and ‘barbecue’ fool you, Etxebarri is anything but a homely rustic family kitchen. In fact it’s currently ranked as the 13th best restaurant in the world.

Before writing about my second visit to the restaurant I began looking up details online about its history, critical acclaim etcetera, but soon had to stop, take a deep breath, and cleanse my contaminated thoughts. Extebarri seems to mean so many things to so many people, so before I learned more about how it was seen by others I decided to write down my own experience, my own Etxebarri.

The first thing that strikes one is of course its surroundings. The trip there took us through some surprisingly boring neighborhoods considering how lush and alive most of the Basque landscape is. After passing a few kilometers of uninspiring light industrial areas the landscape suddenly morphed – I still can’t say how – into a splendidly lush green valley surrounded by snow clad mountains, and encompassing it all – the mouth-watering smell of smoke.

Restaurants like Fäviken and Noma may be gaining acclaim for bringing the diner to the produce instead of the other way around, Etxebarri has its own buffalo herd roaming the slopes outside and has been using not only different types of local wood but all that the small valley has to offer them since 1988, including carefully restoring the old stone house that the restaurant resides in. 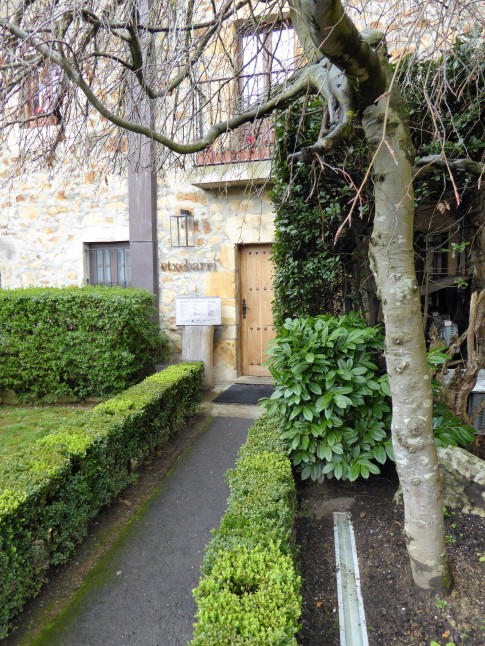 The entrance to Etxebarri is rather unassuming. If it weren’t for the discrete menu posted next to the sign it would be easy to mistake the building for a private residence. The interior is in the same mountain lodge style; heavy wooden beams, bare walls and wooden floors that creak and complain as you walk over them. But it isn’t shabby in any way – only homely – and everything that takes place at the table is of the latest international standard and quality.

The first time we ate at Etxebarri we had booked and were at most a bit underdressed…. or maybe not just a little. 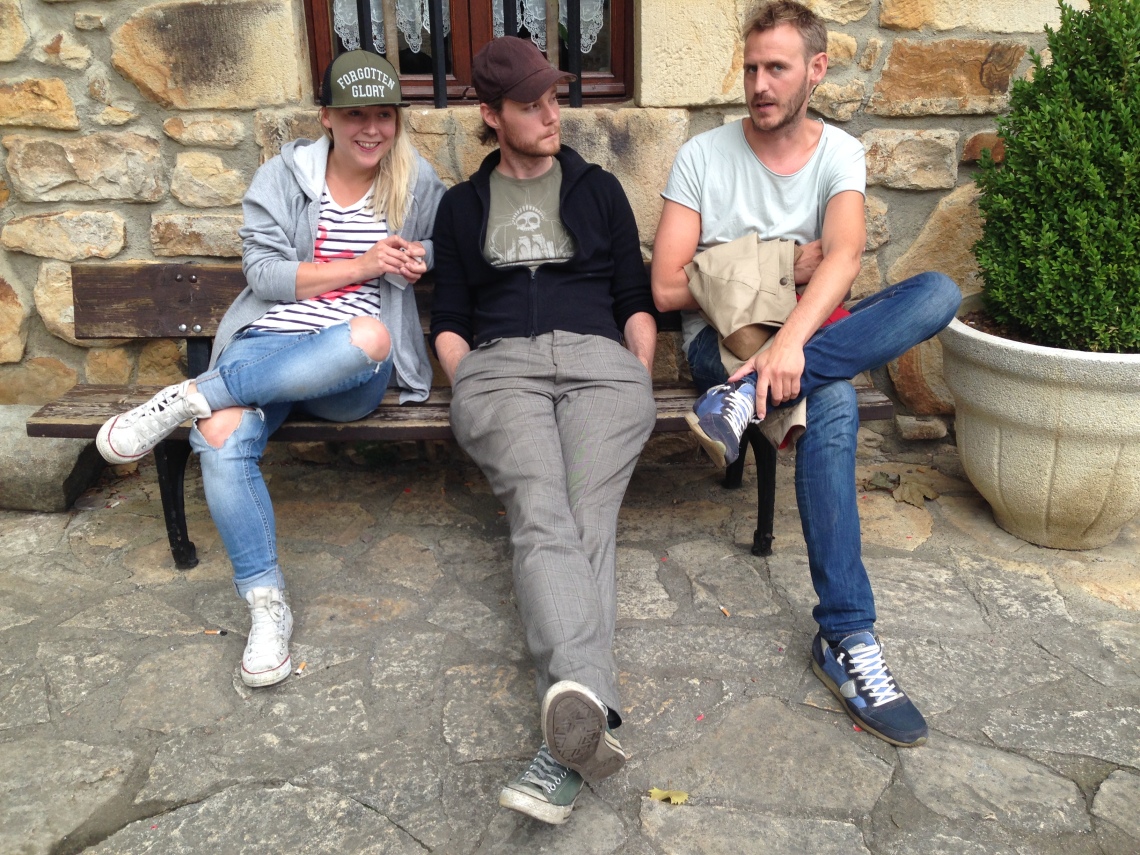 The second time we look – if possible – worse, and my persistent attempts at booking a table for us had failed. But Etxebarri does have a bar on the ground floor where the locals come to grab a beer or two nd discuss the finer points of small town life, so we figured we might as well turn up and hope for the best.

As predicted no tables were available, so we asked if we might have a beer and some chorizo and olives downstairs. They were very accomodating, and the home-brewed beer they served was better than most aperitifs I’ve had. The chorizo they served us was of course from their own animals, delicately handled and mixed with an array of local peppers and herbs. By now we were getting quite hungry, and had just given up on a table when a waiter came by and told us that they had a table up in the loft that they didn’t use very often. He explained it as not quite being in the restaurant and seemed very apologetic, but of course we jumped at the chance of securing a table.

The loft we were shown to functioned as a sort of chambre séparée / storage facility. Apparently most guests asked to switch tables if seated here, but in this case it suited us just perfectly.

After spending quite some time perusing the menu we decided to go for an a’la carté bonanza. This of course made serving us up on the loft away from all the other guests even more difficult, but the staff took everything in stride and quickly helped us settle in. 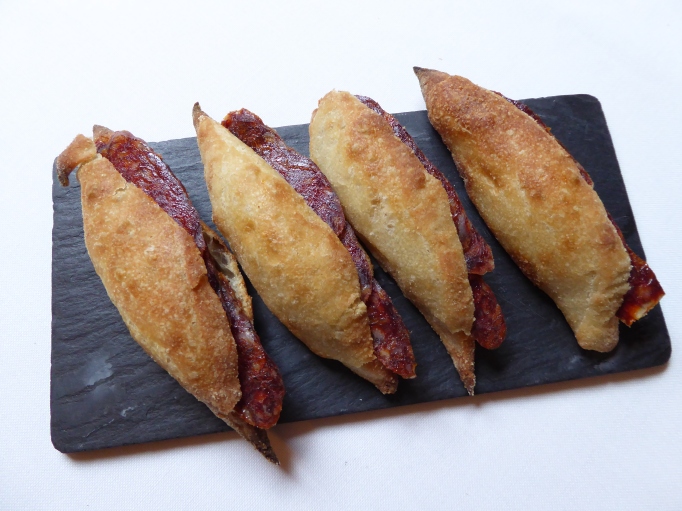 But first we were served some small breads filled with cured chorizo. The bread was divine and the chorizo exquisite. It never ceases to amaze me that you can create food so flavorful with only two ingredients – as long as you get it right.

I had been having wet dreams about the goat butter we were served two years ago, but in between squabbling together and confusing our orders we ended up starting with the buffalo mozzarella instead. The milk comes from the heard owned by etxebarri and is lightly handled and smoked before served on a bed of split almonds with some dried dill on top. Wonderful stuff, but I can’t help but miss the density of a more traditional mozzarella, even if the light smoking technique used here is very impressive.

The next dish was Catalan style coca bread topped with local anchovies. Nothing more, nothing less, but again, when the quality of both ingredients is superb who needs anything else? To be completely honest there was a light touch of tomato and olive paste underneath the fish, but if you hadn’t known it was there you never would have noticed.

The next dish was nothing short of phenomenal. Palamós prawns. Grilled. Served. Nothing short of heaven. We had this the last time we were here as well, and they’ve definitely stepped up their game when it it comes to the preperation of the prawns. 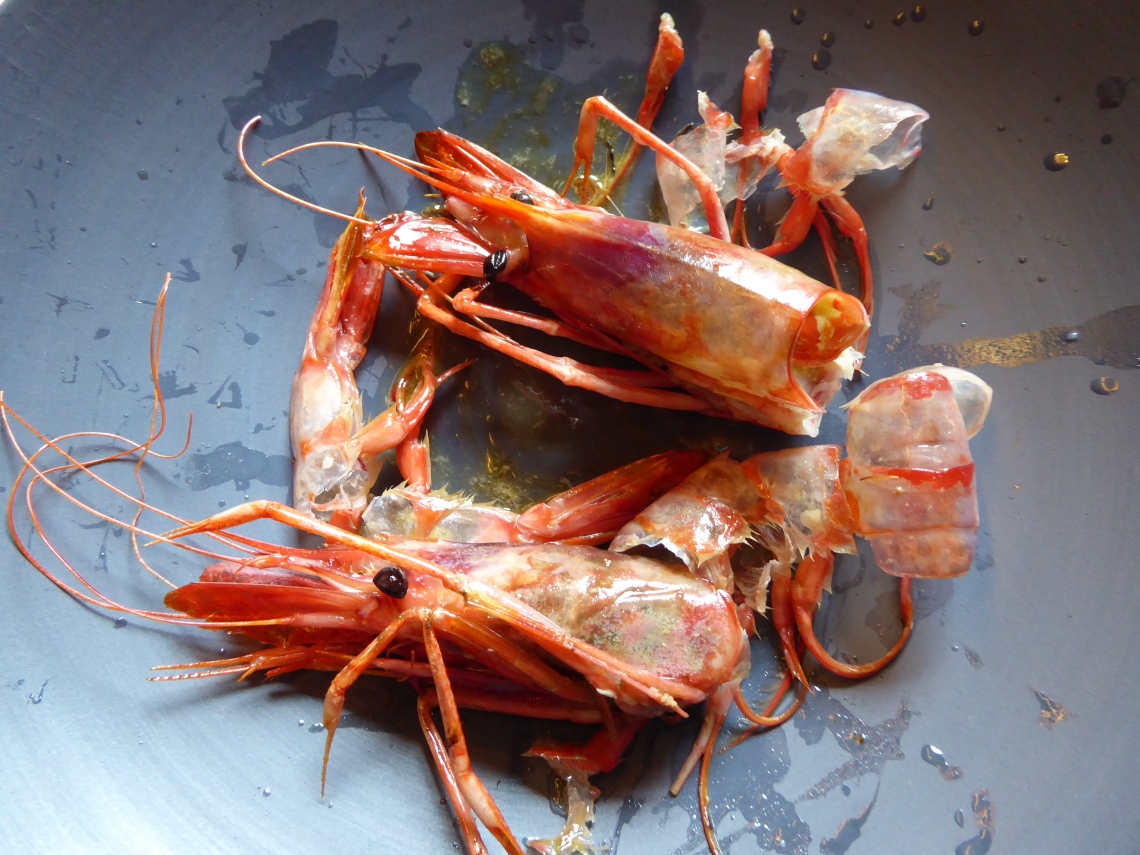 After a slight pause to thank the gods in the kitchen we prepared ourselves for the next dish. 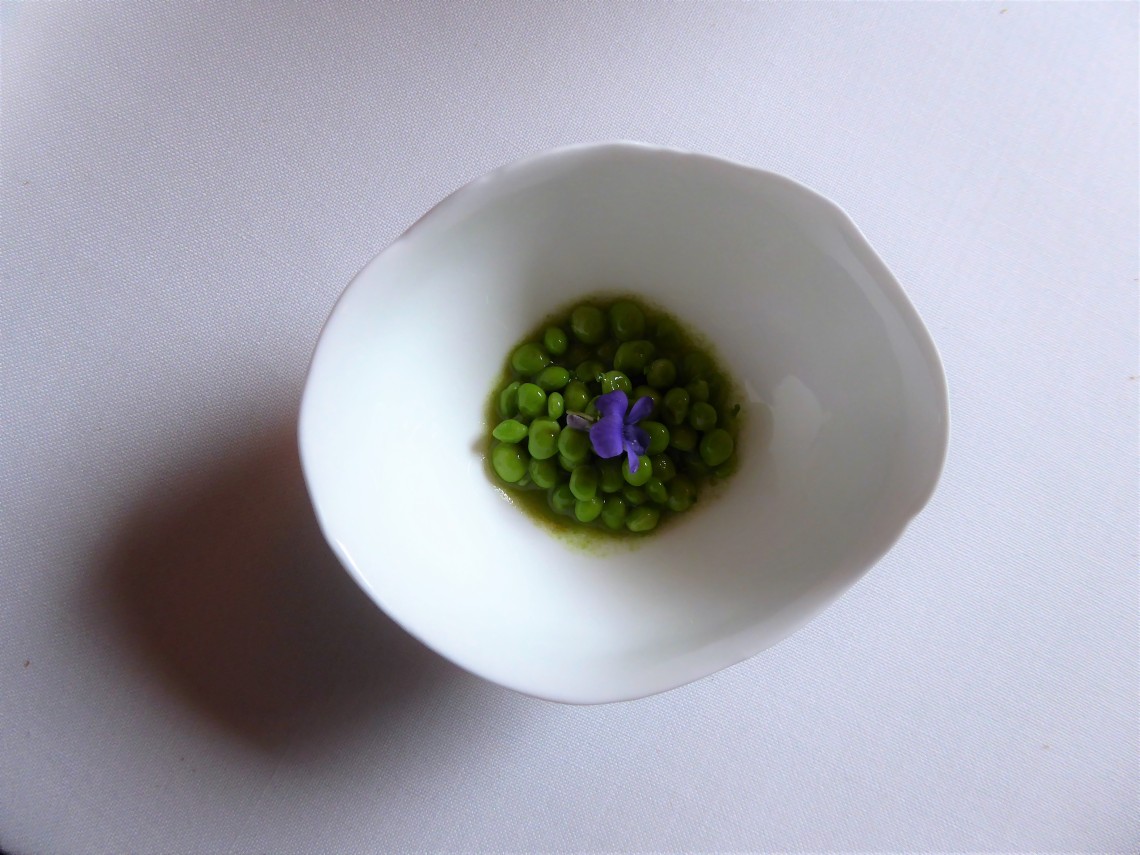 Since we were planning on going to Bar Nestor in San Sebastian in the evening we had opted out of the much celebrated Rib Eye and put together a lighter menu. Every year wild Guisante Lágrima peas are picked in the Biscaya region. They’re fondly called “caviar vegetal de Gipuzkoa”, and when these small bowls were set in front of us we understood why. The peas were so fresh they almost popped in out mouths, and the shells had been mixed down and cooked to a broth that hightened the taste even more.

This dish seems to have divided many visitors to Extebarri. While the menu said ‘scrambled eggs with St. George’s mushrooms’ the texture was in fact more like an egg custard and reminded me of some delightful dishes imbibed on my last trip to Japan. The eggs were of course from Extebarris own coop where the hens live on a strict diet of corn and local herbs, and the silky texture of the dish coupled with the aromatic, thinly sliced mushrooms  won the  entire table over.

In fact only my bowl was left unlicked, and that was only due to a sense of decorum on my part.

At this point some honor should be given to our companion through the meal. The Doniene from Doniene Gorrondona (a winery which I’ve written about here) may have been one of the cheapest titles on a very plentiful and well selected wine list, but since it was lunch and we were scheduled to meet with the wine maker and export manager later that day we settled on the Doniene, which worked remarkably well with most dishes, displaying the versatile character of the Hondarrabi Zuri grape.

Even though we were more than full at this point the chef at the table decided that we simply had to have dessert. Smoked milk ice cream served with a sauce of local berries and a cake with almonds and apple were delicious enough to make us forget how much we had already eaten, and the flan pictured below was simply exquisite. So delicate and well-balanced in flavor… I could see pride in the waiters eyes as he served us this dish, and I couldn’t help but congratulate him when he came to clear our plates. That might sound weird, but as waiters our identity is and must be intertwined with our workplace, and to be able to serve such dishes is something that we do pride ourselves on.

It is interesting to compare one overwhelmingly positive experience with another, but in that context I must say that Etxebarri has gotten better at almost every detail since our last visit. Small details yes, but when added up they made a big difference to our dining experience. The work the kitchen does with different types of smoke is nothing but masterly, and the genuine warmth and care that the front of house meets you with provides a relaxed atmosphere and invites to a more down to earth dining experience.

You don’t have to put on your high heels, neither to you have to pay out of your nose to dine here. As we managed to prove this last time you may not even have to book a table (but don’t quote me on that)  but you (and this I do guarantee) will have an experience quite unlike any other.

That is my Etxebarri.