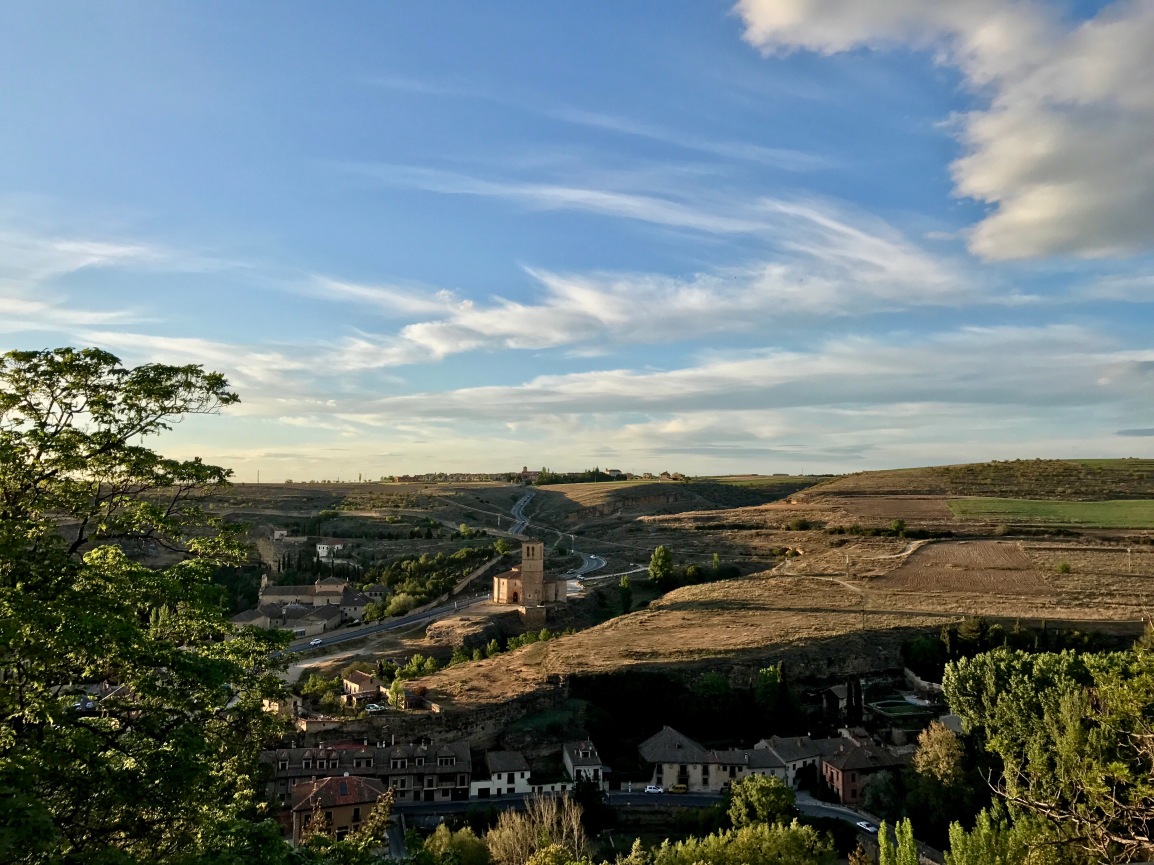 As with most things in life wine is subjected to trends and fashion. What the journalists are giving high scores may be the exact opposite of what normal people are imbibing. What people want to be seen drinking isn’t always what they should be drinking. But if there is one Spanish trend that seems to be on the move both at home and abroad it’s wines from Rueda.

But what is Rueda? And what does it represent?

Lying in the heartland of Castilla y Leon it is soaked in history and intrigue. Once upon a time the Romans controlled the area. They left traces of aqueducts and vines behind but are otherwise mostly visible in history books and tourist shop souvenirs. Queen Isabel the first of Castile was born here, and before the Spanish court was relocated to Madrid the tumultuous country was ruled from castles perched on hillsides along the large plateau.

Rueda is surprisingly flat for wine country. One does sense the high elevation, but mostly the hills are low and rounded with few peaks or steep climbs. The vineyards are typically spread out wide in orderly rows between 700 and 800 meters above sea level upon a mix of red clay, sand, silt and medium sized pebbles, some limestone outcrops close to the Duoro river and gravel deposits spread throughout. 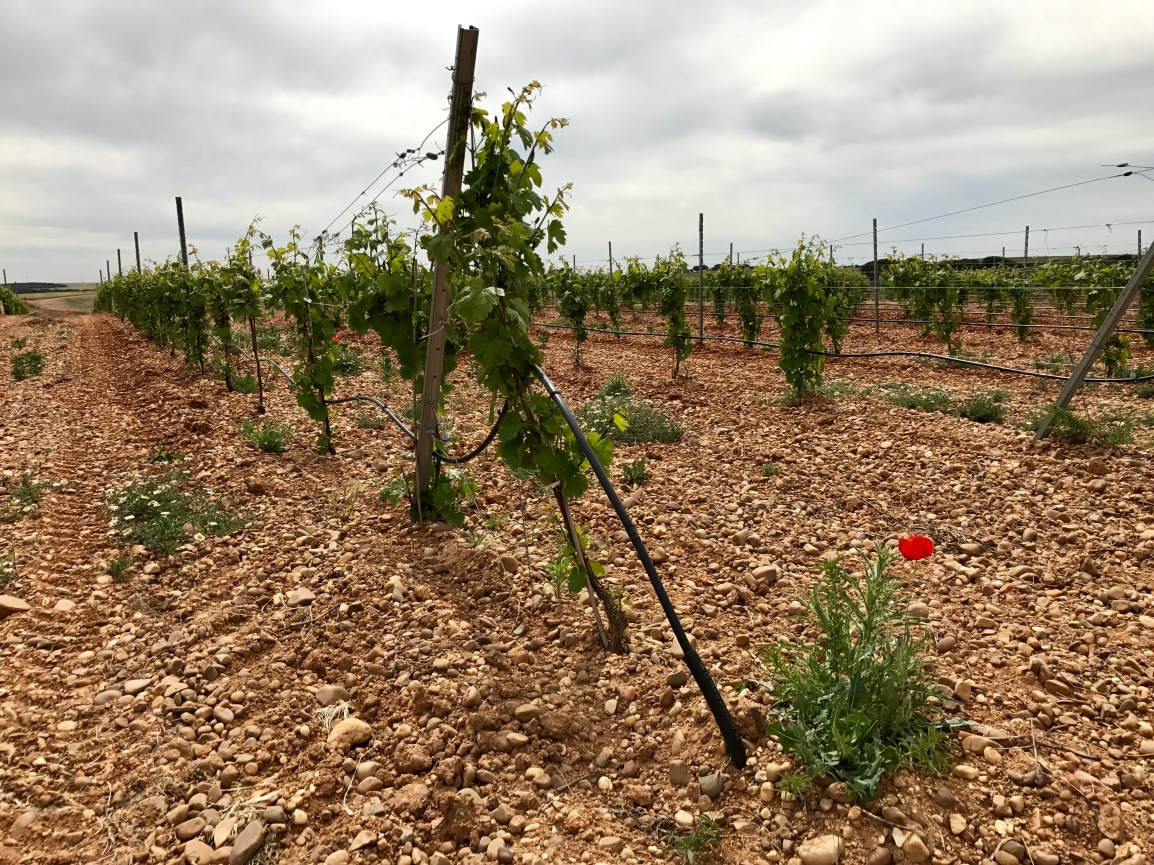 The climate is continental with cold and long winters, short springs and hot and dry summers only interrupted by the odd and unwelcome thunderstorm. Total rainfall is between 300-500 liters per year and annual sunshine can be as high as 2600 hours. Maximum yields vary between 8000kg/ha and 12000kg/ha depending on grape variety and whether the vines are trellised or bush vines. 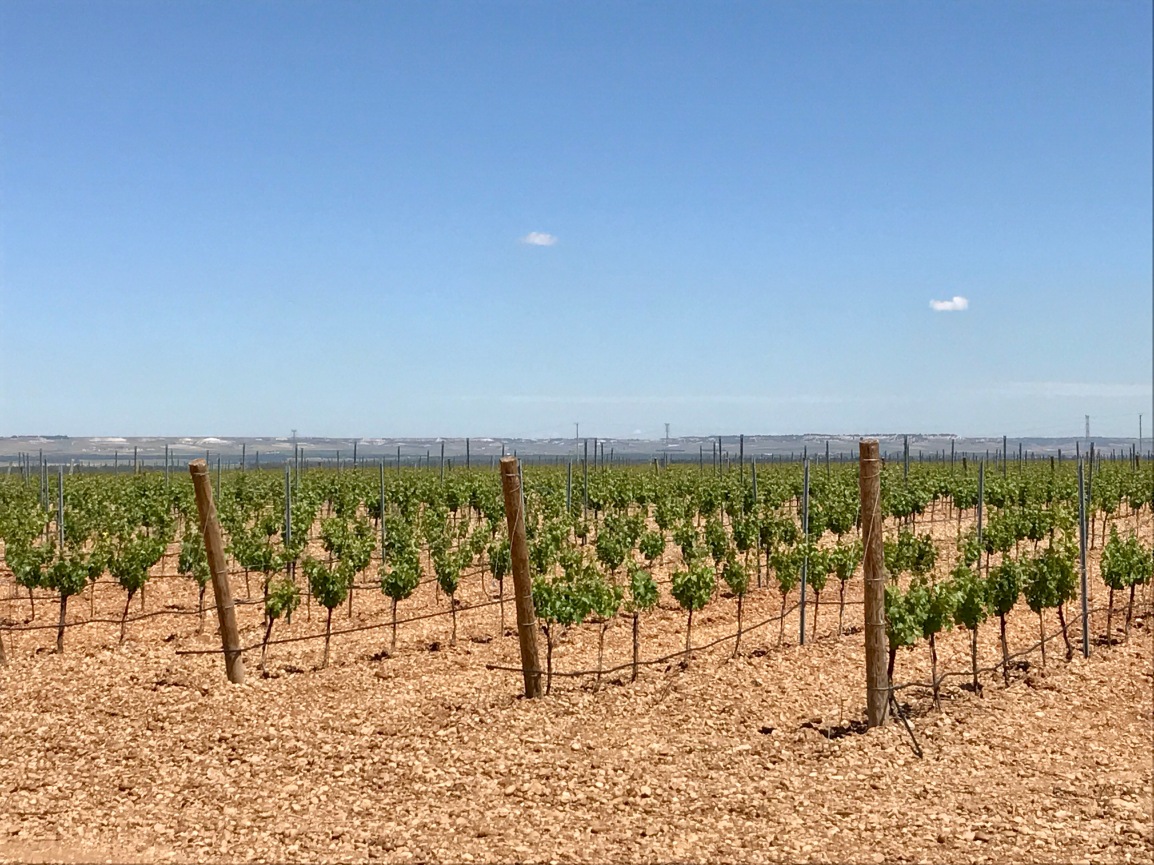 This is a land of grazing sheep, and grilled lamb chops are quite popular, as are local sheep cheeses and cochinillo – suckling pig quartered rudely before the guests, sometimes even with a porcelain plate instead of knife. Morcilla is revered and each town has their own specialty when it comes to beans.

The fresh and light Verdejo that we think of today is a new concoction. Traditionally the wines made in Rueda were fortified and matured in barrels – aged under flor or oxidized like Northern Spanish sherries. These wine styles were known as palido and dorado and are still present in the area today although they are extremely marginalized. 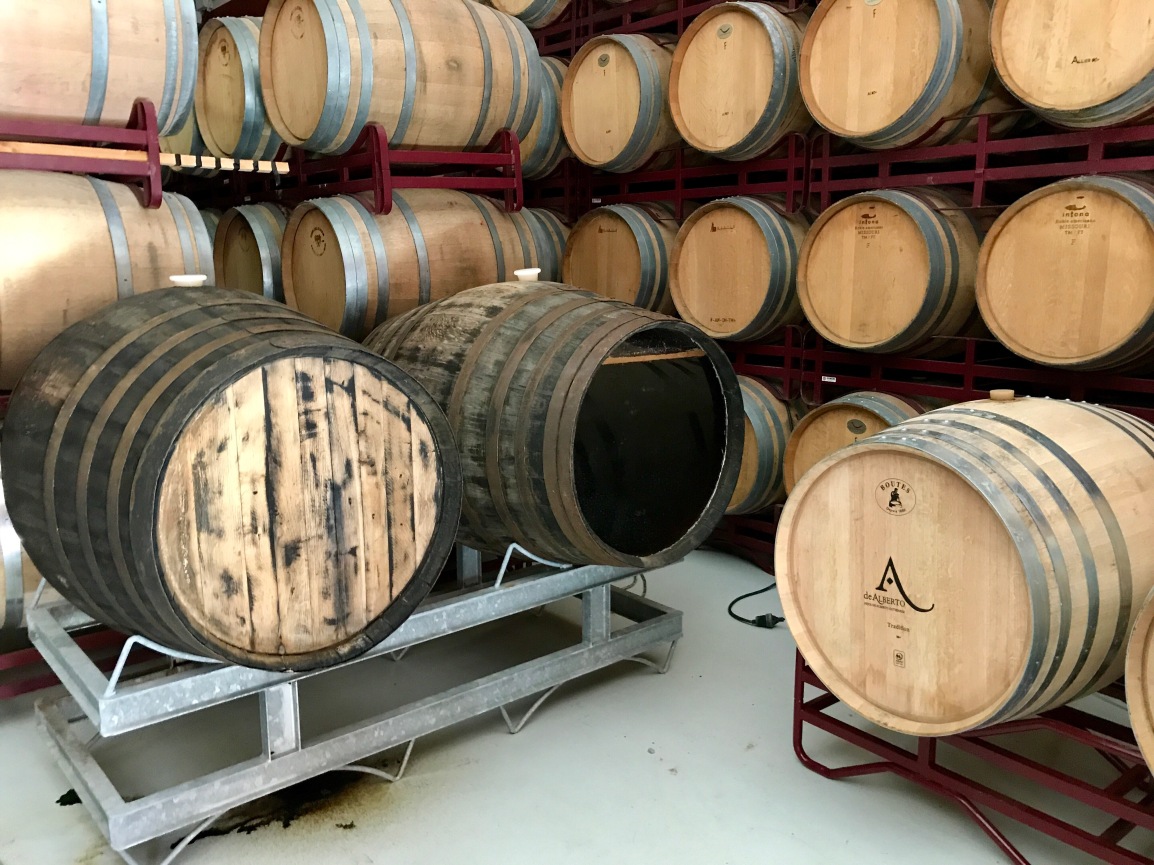 After the phylloxera the robust Palomino Fino grape was brought up from Andalucia to be used in the fortified wines. Today new plantings of the variety are no longer allowed as the old palomino vines are deemed too uncouth for the modern Rueda style. Even the official D.O. brochure states an intent to exclude these vines and a prediction that they will soon be uprooted in favor of more Verdejo… 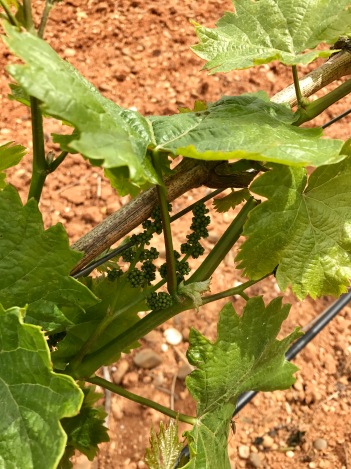 In the 1950’s yet another new grape was introduced to the region. Viura had gained recognition as Riojas white grape of choice and was seen as a more noble variety than Verdejo. Pure Viura wines are and were however unusual, instead the grape was blended with the Verdejo to make both fortified and other wines.

The 70’s marked an era of modernization and immigration. It seems to have started around the same time as Rioja winery Marques de Riscal together with consultant Emile Peynaud somehow found their way to the region whilst looking for terroir suitable for white wines. Aside from establishing what is today the winery with the largest estate-owned stock of vines they were vital in introducing the ever popular Sauvignon Blanc to the region. Finally – the D.O. Rueda was established in 1980 as the first official wine appellation in Castilla y León.

Today the members of the D.O. consist of three cooperatives, around 18-20 winery groups that have either moved in from other regions or have expanded their Rueda wineries and about 50 local wineries. That means that roughly 25% of the D.O. have interests in other parts of Spain. 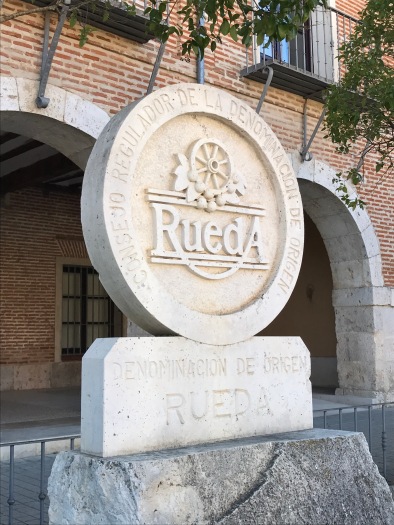 Now what – if anything – does that mean for the region? Most of these 25 percent have recently expanded into the area and are hungry for vineyards and grapes. Demand for the verdejo grape has risen in the past few years, leading to heavily increased prices and competition between the bigger wineries. Smaller, family-owned wineries haven’t been completely left behind yet, but those who own most of the vineyards used in their production are thanking their lucky star right now.

Another issue that is worth adressing is the high demand for young wines. Many of the wineries that we spoke to are sold out of last years vintage already in October or early November and the market seems to be demanding the last vintage even when it comes to more serious oak-fermented wines and special selctions. This is quite frankly ludicrous, especially considering that even the simpler verdejos that we tried would have benifited from a few more months in bottle and if not that then at least a quick decanting. One of the smaller wineries even told us about a competitor who the year before last had harvested in October like everyone else (2015 was a late year) and proudly released the new vintage as early as November.

But who has the power to withstand market demands? Especially when everyone around you is caving in and money needs to be reinvested into continually more expensive grapes? As of today that responsibility is left to the consumers – that is to say the same impatient bastards that are demanding the wines younger and younger. The small night watch of sommeliers and journalists are – at least in my backyard – mostly too uneducated when it comes to verdejo to distinguish youth from simplicity or to uninterested to stand up for this grape.

Another area up for discussion is production method. We visited many of the bigger wineries, many of them pumping out several million bottles per year. Production was neat, sleek and stream-lined. Grapes are mostly machine harvested during the night, which considering how flat Rueda is and how gentle modern harvesters have gotten actually isn’t such a bad idea for simple wines. Upon entering the winery most wines were fermented at quite low temperature and then – if the wine was deemed to be of extra good quality – battonaged to within an inch of its life. The whole discussion of whether battonage is always beneficial to the wine or if you can get too much of the good stuff is one we won’t get into here, but there’s no denying that the more extreme uses completely clouded the typicity of the verdejo grape and led to harsh, nervous wines. 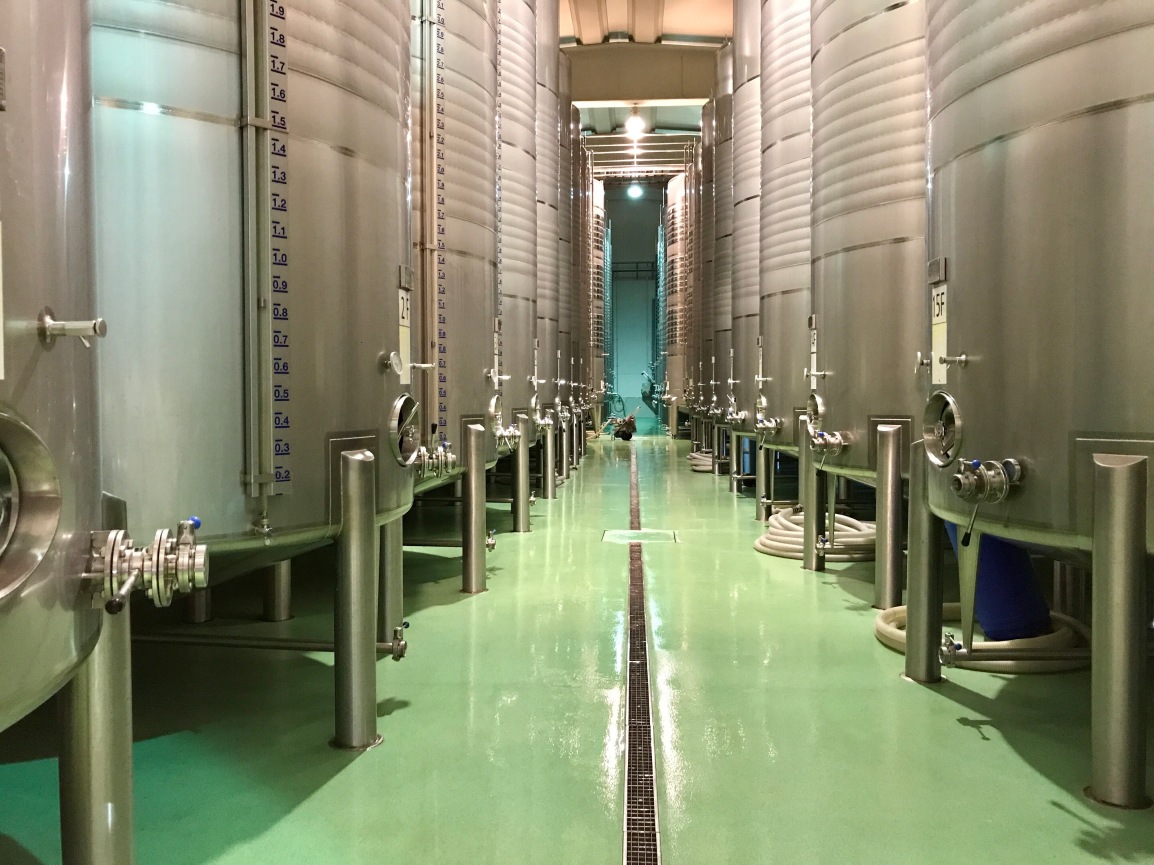 One producer lied outright to us when we asked about acidity levels and there was a bit of squirming when it came to the question of yeast, but on the whole producers were very honest about their choices, about the red tape surrounding going organic, their worries about drought, their experiments and experiences…

When asked about the future of Rueda people were carefuly optimistic. There is a palatable/tangent sense of pride in what they’re doing and in the worth of the verdejo grape. So much actually that the D.O. had instructed the producers to hold the tasting of red wines and rosado to a minimum. Other”wines” that were left out of the tastings was the new frizzante style. Wines of sometimes up to 100 grams of sugar per liter vinified in an easy to drink style with a slight fizz, a rainbow of colors, lower alcohol and labels that seemed tailored to pre-teens and prom queens. For one of the three big cooperatives this frizzante-style wine makes up a third of their production – 2 million bottles. That is an enormous output for a wine-style that was only introduced to Rueda in 2011. 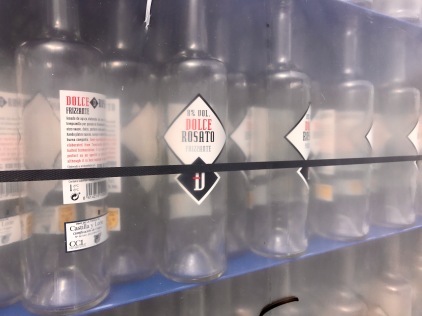 So where to from here? And from a consumer viewpoint – where and how do we find the good stuff? To quote an article written by Brittish MW Sarah Jane Evans.

“But – and this is the substantial but – this recent success of Rueda contains its downfall. One critical friend is Victor Rodriguez, who was involved in the early days of Naia. He explains frankly: ‘Rueda’s popularity now is linked to a growing vulgarisation of the origin and the style of the majority of the wines.’ By vulgarisation he means the flood of low-priced Ruedas with their ‘bubblegum’ aromatics which come from cool fermentation with commercial yeasts, and which show little of the grape’s varietal character.”

But there are ways around this.

Let the wines rest. Check and see how many million bottles are produced of each wine. Wait with the fermentado en barrica. Decant even simple wines. And don’t worry –  even bad verdejo is usually drinkable verdejo. And it’s cheap and enjoyable as fuck. For now.